PHILADELPHIA, Jan. 4, 2021 /PRNewswire/ — Two Pennsylvania health systems renowned for their use of digital technology are jointly deploying the Strongline Staff Safety System to all of their clinical facilities and their entire patient-facing workforce to enhance protection for their staff. 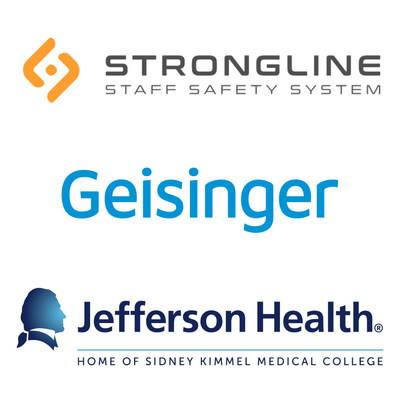 Strongline uses Bluetooth technology combined with a badge that instantly identifies the location of any individual who triggers the alarm. Designed by nurses and security staff at Jefferson Health in Philadelphia, it allows for more rapid assistance than standard wall-mounted or computer-based alarms. The badges have small buttons which staff can discreetly push so as to not escalate a confrontation.

The pressed button triggers silent alarms instantly alerting nearby staff, subscribed team members, such as a nurse manager or security guard, as well as security dispatch. The alert includes the name of the staff member and their specific real-time location.

“Caregivers must have quick, reliable access to help,” said Jaewon Ryu, MD, JD, President and CEO, Geisinger. “After an initial deployment at one of our community hospitals with immediate, positive feedback from security and nursing staff, we decided to employ the Strongline system across our facilities.”

Violence against health care workers is an ongoing national crisis with 75% of workplace assaults annually reported to OSHA occurring in health care and social service settings.

“What our nursing and security teams found most impressive about the system is the simple deployment including preparation and assignment of the durable badges for easy distribution, prompt training of staff, ongoing monitoring of all systems and badges, and upgrades to the latest technology as it evolves,” said Janet Tomcavage, Executive Vice President and Chief Nursing Executive for Geisinger.

At Jefferson, Strongline has been deployed at its center city Thomas Jefferson University Hospital campuses for a year. Jefferson is in the process of extending Strongline to all of its 11 acute care hospitals, and ultimately plans to badge nearly 25,000 staff members.

“The Strongline system is activated by staff more than 150 times per month and feedback from security and caregivers is extremely positive,” said Stephen K. Klasko, MD, MBA, President of Thomas Jefferson University and CEO of Jefferson Health. “They know when they quietly press that button someone is coming to help.”

“Using Strongline also generates deep appreciation for leadership’s commitment to their safety,” Dr. Klasko said. “Strongline is a turnkey safety solution that was developed over several years by the nursing, security and innovation teams at Jefferson in partnership with Collateral Opportunities, a software company with a decade of partnerships with health systems to find software solutions to improve care and financial performance.”

“The bottom line is that our leadership team believes that staff safety is a top priority,” Ms. Tomcavage said.

About Strongline
Strongline is a rapidly expanding technology company that is creating dramatically safer work environments for those who choose patient care as their profession. With violence against health care professionals on the rise, Strongline has developed a cutting edge, Bluetooth-based, wearable panic button that also serves as a powerful de-escalation tool, allowing staff to instantly summon help to their specific location. For more information, visit Strongline.com.

About Geisinger
Geisinger is committed to making better health easier for the more than 1 million people it serves. Founded more than 100 years ago by Abigail Geisinger, the system now includes nine hospital campuses, a 550,000-member health plan, two research centers and the Geisinger Commonwealth School of Medicine. With nearly 24,000 employees and more than 1,600 employed physicians, Geisinger boosts its hometown economies in Pennsylvania by billions of dollars annually. Learn more at geisinger.org or connect with us on Facebook, Instagram, LinkedIn and Twitter.

About Jefferson Health
Jefferson Health, home of Sidney Kimmel Medical College, is reimagining health care in the greater Philadelphia region and southern New Jersey. Jefferson’s dedicated team of doctors, nurses, health professionals and staff provides a range of primary to highly-specialized care through 14 hospitals (seven are Magnet®-designated by the ANCC for nursing excellence), more than 40 outpatient and urgent care locations, the NCI-designated Sidney Kimmel Cancer Center, Magee Rehabilitation and the JeffConnect® telemedicine program. For 2019-2020, Thomas Jefferson University Hospitals is ranked among the nation’s best hospitals in eight specialities by U.S. News & World Report. Jefferson Health’s mission is to improve the lives of patients in the communities it is privileged to serve through safe, effective, equitable, compassionate care.

The merger of FCA and Groupe PSA has been completed

You may have missed

The merger of FCA and Groupe PSA has been completed